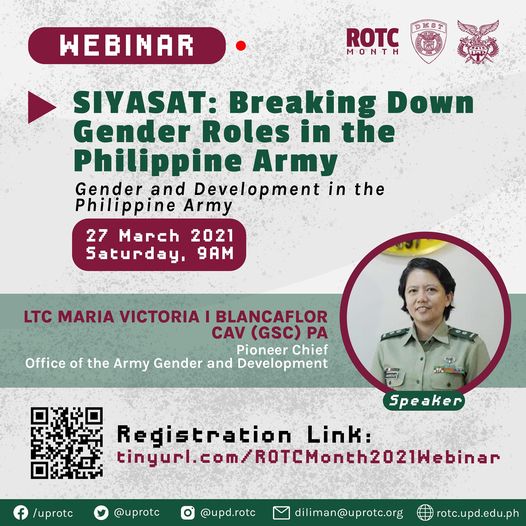 In celebration of the 2021 National ROTC Month and the International Women’s Month, the University of the Philippines Diliman Corps of Cadets held its webinar entitled SIYASAT: Breaking Down Gender Roles in the Philippine Army on 27 March 2021.

The UPD Corps of Cadets invited groundbreaking women who left estimable legacies in the Philippines. LTC MARIA VICTORIA I BLANCAFLOR CAV (GSC) PA was invited as the speaker for the webinar. LTC BLANCAFLOR discussed her experiences as one of the first female graduates of the Philippine Military Academy until eventually becoming a battalion commander in the Philippine Army. She also shared how the roles of females in the Army developed throughout time, along with progress being made in making the institution more inclusive to women and persons of all genders.

In addition to LTC BLANCAFLOR was LTC CONCEPCION G REAÑO (MI) PA, the current the first female Commissioned Officer of the Philippine Army to be awarded Distinguished Conduct Star, and the the first female Corps Commander of the UP Diliman ROTC Unit, VGD. MARIA REGINA CORAZON P SEVILLA-SIBAL, as reactors. Together, they shared their insights and sentiments towards the experiences, challenges, and achievements of women in the Army tackled by LTC BLANCAFLOR. They also recalled their past experiences as female cadets to emphasize what are the significant learnings they faced in the challenges of their times.

The Corps sends its heartfelt gratitude to the speaker, reactors, and everyone who attended our webinar. Thank you for making the event a successful and fruitful one. We hope to see you in our future events. Till next time!