On 02 November 2020, what was dubbed as the strongest typhoon of the year, Typhoon Rolly (internationally known as Typhoon Goni) made landfall hitting Catanduanes and other surrounding areas including Albay. Anticipating the destructiveness of the typhoon, the UP Corps of Sponsors (UP CoS) and the UP Corps of Cadets (UP CoC) put into action one of their three tenets — service.

Together with the UP CoC, the UP CoS launched Tabang Ta!, a cash donation drive for the victims of the above-mentioned typhoon. This was spearheaded by the Deputy Corps Sponsor, Caren Claire L. Avenido, and the UP CoC Executive Officer and Corps Training and Operations Officer CCpt Mary Angeline G. Polvito, 1CL.

By 04 November — approximately 48 hours after the first publicity material was posted — Php 32,183.20 was raised. And in less than a week, a total of Php 91,000.00 was collected for the constituents of Polangui, Albay.

Dr. Adrianne Santayana, an alumna of the UP Corps of Sponsors, sent the list of necessities of the members of the community. On 06 November, the UP CoC began procuring and buying the necessary relief goods. A total of four hundred (400) relief packs were made. Each package contained:

On 10 November, representatives from the UP CoC traveled to Polangui Albay to turn-over the donation packs to Polangui Vice-Mayor Buboy Fernandez and Mr. Adrian Salceda, President of the Polangui Association of Barangay Captains. Polangui City Councilors Jun Villar, Jesciel Salceda, and Noli Samlero along with Dr. Santayana were also present for the turn-over.

On 11 to 13 November 2020, the relief packs were distributed to households in Brgys. Gabon Ubaliw, Centro Occidental, Lanigay, Balangibang, and Cotmon.

Despite the pandemic, the UP CoS was still able to stay true to its tenet of service to the community. Dios Mabalos! 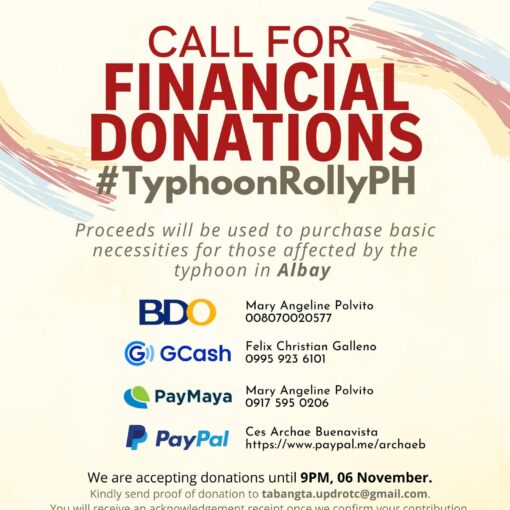 Tropical cyclone “Rolly,” labeled as the strongest typhoon of the year, hit various parts of Southern Luzon and the Bicol Region and […]